On the fundamental discoveries from Occult Chemistry:

In 1983, astronomer Zdenek Sekanina published a paper criticizing the comet hypothesis. He pointed out that a body composed of cometary material, travelling through the atmosphere along such a shallow trajectory, ought to have disintegrated, whereas the Tunguska body apparently remained intact into the lower atmosphere.

During the 1990s, Italian researchers extracted resin from the core of the trees in the area of impact, to examine trapped particles that were present during the 1908 event. They found high levels material commonly found in rocky asteroids and rarely found in comets.

The chief difficulty in the asteroid hypothesis is that a stony object should have produced a large crater where it struck the ground, but no such crater has been found.

Fesenkov (1962) claims, "According to all evidence, this meteorite moved around the Sun in a retrograde direction, which is impossible for typical meteorites...." Fesenkov notes that meteorites rarely hit the earth in the morning, because the morning side faces forward in the planet's orbit. Usually the meteorite overtakes the earth from behind, on the evening side.

T.R. LeMaire, a science writer, continues this thought, by suggesting "The Tunguska blast's timing seems too fortuitous for an accident" (LeMaire 1980). He claims that a five-hour delay would make the target of destruction St. Petersburg, adding that a tiny change of course in space would have devastated populated areas of China or India.

Can we assume that the 'pilot' chose a cloudless day with excellent visibility from aloft to assure a safe drop? American Military strategy called for identical weather conditions; for a perfect strike on Hiroshima's industrial heart, the Enola Gay's bombardier was forbidden to release through a cloud cover: he had to see the target below. To maximize blast destruction, minimize radiation perils: the bomb was set to explode at a high altitude rather than against the ground. Similarly, the Siberian missile detonated high in the air, reducing or even eliminating fallout hazard (LeMaire 1980).

LeMaire maintains the "accident-explanation is untenable" because "the flaming object was being expertly navigated" using Lake Baikal as a reference point. Indeed, Lake Baikal is an ideal aerial navigation reference point being 400 miles long and about 35 miles wide. LeMaire's description of the course of the Tunguska object lends credence to the thought of expert navigation:

The body approached from the south, but when about 140 miles from the explosion point, while over Kezhma, it abruptly changed course to the east. Two hundred and fifty miles later, while above Preobrazhenka, it reversed its heading toward the west. It exploded above the taiga at 60degrees55' N, 101degrees57' E (LeMaire 1980).

“TO THE EDITOR OF THE TIMES.”
“Sir,--I should be interested in hearing whether others of your readers observed the strange light in the sky which was seen here last night by my sister and myself. I do not know when it first appeared; we saw it between 12 o’clock (midnight) and 12:15 a.m. It was in the northeast and of a bright flame-colour like the light of sunrise or sunset. The sky, for some distance above the light, which appeared to be on the horizon, was blue as in the daytime, with bands of light cloud of a pinkish colour floating across it at intervals. Only the brightest stars could be seen in any part of the sky, though it was an almost cloudless night. It was possible to read large print indoors, and the hands of the clock in my room were quite distinct. An hour later, at about 1:30 a.m., the room was quite light, as if it had been day; the light in the sky was then more dispersed and was a fainter yellow. The whole effect was that of a night in Norway at about this time of year. I am in the habit of watching the sky, and have noticed the amount of light indoors at different hours of the night several times in the last fortnight. I have never at any time seen anything the least like this in England, and it would be interesting if any one would explain the cause of so unusual a sight.
Yours faithfully,
Katharine Stephen.
Godmanchester, Huntingdon, July 1.”

In London on the night of June 30th the air-glow illuminates the northern quadrant of the heavens so brightly that the Times can be read at midnight. In Antwerp the glare of what looks like a huge bonfire rises twenty degrees above the northern horizon, and the sweep second hands of stopwatches are clearly visible at one a.m. In Stockholm, photographers find they can take pictures out of doors without need of cumbersome flash apparatus at any time of night from June 30th to July 3rd.

Some people saw massive, silvery clouds and brilliant, colored sunsets on the horizon, whereas others witnessed luminescent skies at night—Londoners, for instance, could plainly read newsprint at midnight without artificial lights.
http://www.sciam.com/article.cfm?id=the-tunguska-mystery-100-years-later

A woman north of London wrote the London Times that on midnight of July 1st the sky glowed so brightly it was possible to read large print inside her house. A meteorological observer in England recounted on the nights of June 30th and July 1st:
A strong orange yellow light became visible in the north and northeast... causing an undue prolongation of twilight lasting to daybreak on July 1st...There was a complete absence of scintillation or flickering, and no tendency for the formation of streamers, or a luminous arch, characteristic of auroral phenomena... Twilight on both of these night was prolonged to daybreak, and there was no real darkness.
The report that most closely ties these strange cosmic happenings with Tesla’s power transmission scheme is that while the sky was aglow with this eerie light it was possible to clearly see ships at sea for miles in the middle of the night.

“To the Editor of the Times.”
“Sir,--Struck with the unusual brightness of the heavens, the band of golfers staying here strolled towards the links at 11 o’clock last evening in order that they might obtain an uninterrupted view of the phenomenon. Looking northwards across the sea they found that the sky had the appearance of a dying sunset of exquisite beauty. This not only lasted but actually grew both in extent and intensity till 2:30 this morning, when driving clouds from the East obliterated the gorgeous colouring. I myself was aroused from sleep at 1:15, and so strong was the light at this hour that I could read a book by it in my chamber quite comfortably. At 1:45 the whole sky, N. and N.-E., was a delicate salmon pink, and the birds began their matutinal song. No doubt others will have noticed this phenomenon, but as Brancaster holds an almost unique position in facing north to the sea, we who are staying here had the best possible view of it.
Yours faithfully,
Holcombe Ingleby.
Dormy House Club, Brancaster, July 1” (1908 ) 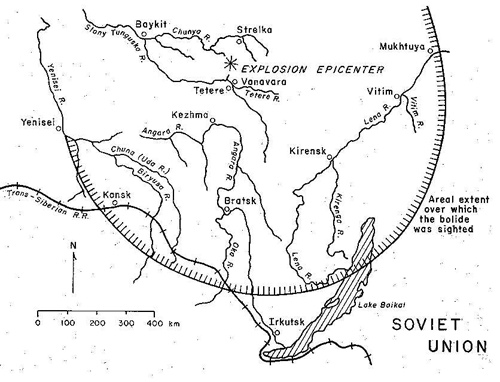 The first report of the explosion was in the Irkutsk paper dated July 2, 1908, published two days after the explosion:

...the peasants saw a body shining very brightly (too bright for the naked eye) with a bluish-white light.... The body was in the form of 'a pipe', i.e. cylindrical. The sky was cloudless, except that low down on the horizon, in the direction in which this glowing body was observed, a small dark cloud was noticed. It was hot and dry and when the shining body approached the ground (which was covered with forest at this point) it seemed to be pulverized, and in its place a loud crash, not like thunder, but as if from the fall of large stones or from gunfire was heard. All the buildings shook and at the same time a forked tongue of flames broke through the cloud.

All the inhabitants of the village ran out into the street in panic. The old women wept, everyone thought that the end of the world was approaching.

A collection of papers by B. DePalma: Glanda talamus, gate to the underworld:

A crea in corpul subtil:

http://www.justintimeadventures.com/pipermail/torg/1998-March/012724.html (shape of the cosm section)