Independent but nearly simultaneous proposals by H. B. Witter, Jean Astruc, and Johann Gottfried Eichhorn separated the Pentateuch into two original documentary components, both dating from after the time of Moses. Others hypothesized the presence of two additional sources. The four documents were given working titles: J (Jahwist/Yahwist), E (Elohist), P (Priestly), and D (Deuteronomist). Each was discernible by its own characteristic language, and each, when read in isolation, presented a unified, coherent narrative.

The documentary hypothesis has more recently been refined by later scholars such as Martin Noth (who in 1943 provided evidence that Deuteronomy plus the following six books make a unified history from the hand of a single editor), Harold Bloom, Frank Moore Cross and Richard Elliot Friedman.

http://www.awitness.org/contrabib/torah/latedate.html (one of the very best)

In our radical new chronology, the Old/New Testaments were written in the period 1715 - 1720, after the crucifixion of Iesous Christos in 1715, at Troy/Constantinopole.


(1) that the tabernacle never existed except on paper; (2) that it was a pure creation of priestly imagination sketched after or during the exile; (3) that it was meant to be a miniature sanctuary on the model of Solomon's Temple; (4) that it was represented as having been built in the wilderness for the purpose of legitimizing the newly-published Priestly Code (P) or Levitical ritual still preserved in the middle books of the Pentateuch; and (5) that the description of the tabernacle furnished in the Priestly Code (P) (Ex 25 through 31; 36 through 40; Nu 2:2,17; 5:1-4; 14:44) conflicts with that given in the Elohist (E) (Ex 33:7-11), both as to its character and its location.

Also the book of Judges, chapters 13 and 21 contradict directly the laws/regulations written down in the book of Leviticus.

The author of the books of 1 and 2 Samuel and the book of Judges HAD NO KNOWLEDGE of the laws/regulations in the Leviticus/Numbers/Exodus, as these were created well after the (J) and (E) versions.


http://www.cassiopaea.org/cass/biblewho6.htm (tremendous research, one of the very best)

Also, the quote from Jeremiah 7:22 contradicts directly the laws/regulations of the Leviticus. There have been attempts to explain this quote (Jeremiah 7:22 For in the day that I brought your ancestors out of Egypt, I did not speak to them or command them concerning burnt offerings and sacrifices...) within the context of figurative language, an argument which can be contradicted immediately:

The Bible Unearthed begins by considering what it terms the 'preamble' of the bible?the Book of Genesis?and its relationship to archaeological evidence for the context in which its narratives are set. Archaeological discoveries about society and culture in the ancient near east lead the authors to point out a number of anachronisms, suggestive that the narratives were actually set down in the 9th-7th centuries:

* Aramaeans are frequently mentioned, but no ancient text mentions them until around 1100BCE, and they only begin to dominate Israel's northern borders after the 9th century BCE.
* The text describes the early origin of the neighbouring kingdom of Edom, but Assyrian records show that Edom only came into existence after the conquest of the region by Assyria; before then it was without functioning kings, wasn't a distinct state, and archaeological evidence shows that the territory was only sparsely populated.
* The Joseph story refers to camel-based traders carrying gum, balm, and myrrh, an unlikely event for the first millennium, but quite common in the 8th-7th centuries BCE, when Assyrian hegemony enabled this Arabian trade to flourish into a major industry.
* The land of Goshen has a name that comes from an Arabic group who only dominated the Nile Delta in the 6th and 5th centuries.
* The Egyptian Pharaoh is portrayed as fearing invasion from the east, even though Egypt's territory stretched to the northern parts of Canaan, with its main threat consequently being from the north, until the 7th century

The book comments that this corresponds with the documentary hypothesis, in which textual scholarship argues for the majority of the first five biblical books being written between the 8th and 6th centuries.

Finkelstein and Silberman argue that instead of the Israelites conquering Canaan after the Exodus (as suggested by the book of Joshua), most of them had in fact always been there; the Israelites were simply Canaanites who developed into a distinct culture.Recent surveys of long-term settlement patterns in the Israelite heartlands show no sign of violent invasion or even peaceful infiltration, but rather a sudden demographic transformation about 1200 BCE in which villages appear in the previously unpopulated highlands;these settlements have a similar appearance to modern Bedouin camps, suggesting that the inhabitants were once pastoral nomads, driven to take up farming by the Late Bronze Age collapse of the Canaanite city-culture.


Exploding the myth of Mozart:


In a 1996 article in the American Scientist, for example, Mike Kay reported that Mozart’s sonatas were divided into two parts exactly at the Golden Mean point in almost all cases. Inasmuch as Mozart’s sister had said that Amadeus was always playing with numbers and fascinated by mathematics, it appears that this was either a conscious choice or an intuitive one. Meanwhile, Derek Haylock noted that in Beethoven’s Fifth Symphony (possibly his most famous one), the famous opening “motto” appears in the first and last bars, but also at the Golden Mean point (0.618) of the way through the symphony, as well as 0.382 of the way (i.e., the Golden Mean squared). Again, was it by design or accident? Keep in mind that Bartók, Debussy, Schubert, Bach and Satie may have also deliberately used the Golden Mean in their music.

Ludwig van Beethoven, there are strong grounds for believing that he was a mason.
"Many of his friends and fellow musicians were masons and there are several references to Masonry in his voluminous correspondence. The Adagio of his Seventh quartet bears the superscription: 'A weeping willow or an acacia over the grave of my brother'. Both Beethoven’s blood brothers were alive when this work was written and so these words probably had a masonic connection. Schindler, one of his biographers, mentions a handshake when visiting the composer: '... a grip of our hands said the rest'. A song, 'What is the Mason’s aim', was written for the 'Loge des Freres Courageaux l'Orient de Bonn' and was published in 1806."
"His presence at concerts given with full masonic rites is documented, and presumably, in order to have been allowed to attend he must have at least been initiated into the Brotherhood."

"There is virtually nothing of what we know as historical literature in India... all we have is a vague oral tradition and an extremely limited number of documented data, which is of a much greater value
to us than that obtained from legends and myths. This tradition gives us no opportunity of recon-
structing the names of all the rulers. The meagre remnants that we do possess are so nebulous that no date preceding the Muslim period [before the VIII century A.D.] can be regarded as precise... the works of the court chroniclers didn't reach our time... all of this leads some rather earnest and eminent scientists claim that India has no history of its own".

"Written memorials of the Indus culture defy decipherment to this day. .. not a single finding can be associated with an actual person or historical episode. We don't even know the language that was spoken by the inhabitants of the Indus valley."

We are told further on that many vital issues concerning the "ancient" history of India are based on the
manuscripts found as late as the XX century. It turns out, for instance, that:"the main source of knowledge in what concerns the governmental system of India and the policy of the state in the epoch of Maghadhi's ascension is the Arthashastra - the book. .. that had only been found in 1905, after many a century of utter oblivion". It turns out that this book is basically an Indian version of the famous me-diaeval oeuvre of Machiavelli. However, in this case the "ancient Indian Arthashastra" couldn't have
been written before the Renaissance. This could have happened in the XVII-XVIII century, or even the XIX.

CHAPTER V.
The Last Siege of the Jews after Christ.

AFTER Nero had held the power thirteen years, and Galba and Otho had ruled a year and six months, Vespasian, who had become distinguished in the campaigns against the Jews, was proclaimed sovereign in Judea and received the title of Emperor from the armies there. Setting out immediately, therefore, for Rome, he entrusted the conduct of the war against the Jews to his son Titus.

Perhaps most important thing about the reign of Titus was his handling of the eruption of Mt. Vesuvius. Though the Jews claimed that the disaster that struck was God's vengeance against Rome, Titus' speedy and exhaustive efforts at relief likely went a long way towards winning him a permanent place in the hearts of the people.

On the way from Naples to the south of Torre Annunziata, 15 kilometers from Naples, there is on the facade of the Villa Pharaoh Mennela a memorial - that is an epitaph for the victims of the eruption of Vesuvius in 1631 - seen on two stone slabs with the text in Latin . On one side of it Resina and Portici, in the list of destroyed cities, the cities of Pompeii and Herculaneum are mentioned! 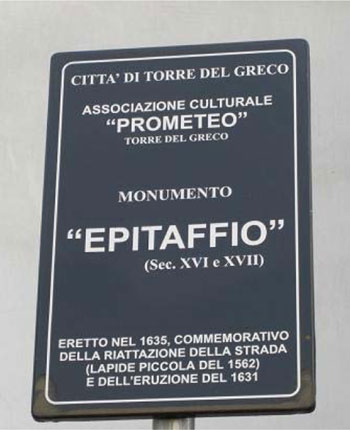 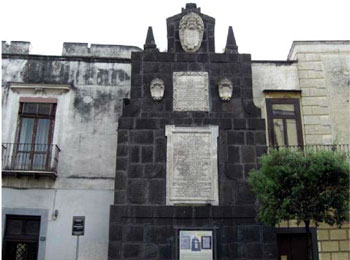 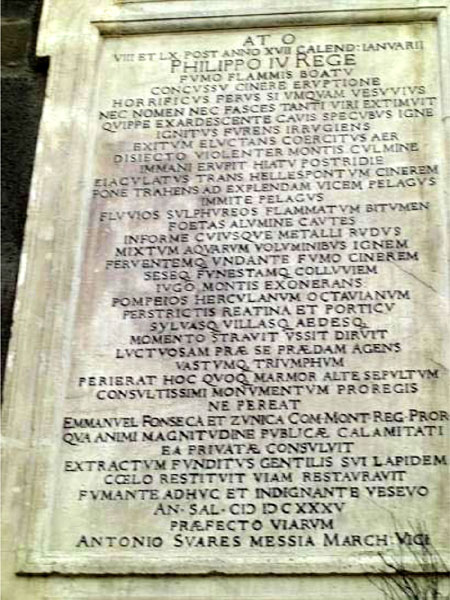 But such is the eruption dated by Calvisius not on the day
common date "24 August", "but on the Kalends of November",
So the 15th November. (Calvisius, 459 f.).

Here you have a knot of men, or round table, presided over in all probability by one or two or a few directors. [Mult material în limba engleză netradus] They are suffered to have their own way; and the defeated world has at last been cowed into the belief that there must be some great "basis of fact," as they say, beneath all these tales about Paul, his elders, his disciples, his troops of friends and of foes.

THE EASTER ISSUE, by G. Nosovsky:

According to my mind Eusebius, who first cites this passage, was its author. Eusebius himself was a historian who admired Josephus very much and made a thorough study of him...

Eusebius tells us in the name of Tertullian that when Pliny the Younger, governor of Bithynia, wrote to Trajan asking for instructions about the Christian race...